The China National Highways (Chinese: t 中華人民共和國國道, s 中华人民共和国国道, p Zhōnghuá Rénmín Gònghéguó Guódào) are a series of trunk roads across mainland China. Although they are called "highways" (e.g., the Jingbao Highway), they are not necessarily freeways. However, like expressways, a toll is sometimes charged. 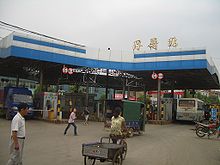 Toll plaza on the combined G106/G316 in the center of the town of Futu, in Huangshi Municipality, Hubei

Although an accepted speed limit on China National Highways is 100 km/h, it is common to see cars pass other by in well in excess of 100 km/h. The lack of speed detection cameras on some routes, lack of a posted speed limit outside of localities and tremendous distances of road mileage, means that enforcing this speed limit is rather herculean. In addition there is a notable shortage of traffic police in mainland China.

Nationwide highways often begin with the letter G, followed by three numerals, e.g.: G107. It is said that the G stands for 国家 (guójiā), or national.[1]

The numbering of the highways is as follows:

Although most Guodao are good paved roads, some sections are still quite rough, such as this 20-km stretch of G209 north of Badong, Hubei

The building of highways is seen as key to accelerating infrastructure construction. In 2003, completed investment in highway construction was 350 billion yuan and 219 key highway projects progressed, focusing mainly on the five north-south and seven east-west national arterial highways as well as highways in western China and in rural areas. By the end of 2004, the total length of highways open to traffic reached 1.871 million km, including 34,300 km (21,300 mi) of expressways up to advanced modern transportation standard, ranking second in the world. The nation's highway density has now reached 19.5 km per 100 km2.

With the completion in 2008 of the five north-south and the seven east-west national arterial highways, totaling 35,000 km (22,000 mi), Beijing and Shanghai were linked by major highways, chiefly expressways, to the capitals of all provinces and autonomous regions of China, creating highway connections between over 200 cities.

The aim of the National Expressway Network Plan approved in early 2005 is an expressway system connecting all capitals of provinces and autonomous regions with Beijing and with each other, linking major cities and important counties. The network will have a total length of about 85,000 km (53,000 mi), including seven originating in Beijing; the Beijing-Shanghai, Beijing-Taipei, Beijing-Hong Kong-Macau, Beijing-Kunming, Beijing-Lhasa, Beijing-Ürümqi, and Beijing-Harbinexpressways. Half of the projects are already completed.

In 2013 the Ministry of Transport announced the "National Highway Network Planning (2013 - 2030)", which will bring the total number of highways to 119, with 81 connecting highways between them. The total mileage will be increased to 265,000 km (165,000 mi), with increased focus on the western and less developed regions.[2] 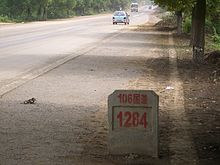 Note: 000 Series China National Highways pointed to five specific vertical routes, as well as seven specific horizontal routes. Routes ending in "0" were north-south (vertical) routes; routes ending in "5" were east-west (horizontal) routes. The new system with two to four numbers that indicate the"NTHS" (7918) system is now in use instead of the 000 Series. For the expressways' new numbering system, see Expressways of China.

It seems that the old 0xx numbers are still signposted using the format GZxx, e.g. in the Qinghai province, there are signs at the G109 (old G025) showing the number GZ25.

RT @PIARC_Roads: [📬#Newsletter] Are you up to date with the latest #PIARC news? Find out here 🔎! And don't forget to subscribe to our free…